A tiny kitten led four big-hearted men and one equally determined RSPCA South Australia rescue officer on a merry chase around Adelaide Airport carpark last Friday, before one rescuer finally managed to extricate him from under a car engine bay.

“It was a game of cat and mouse, but we were the mouse and he was the cat – he certainly had us on the run,” Mark, one of the kitten’s rescuers, recalled. 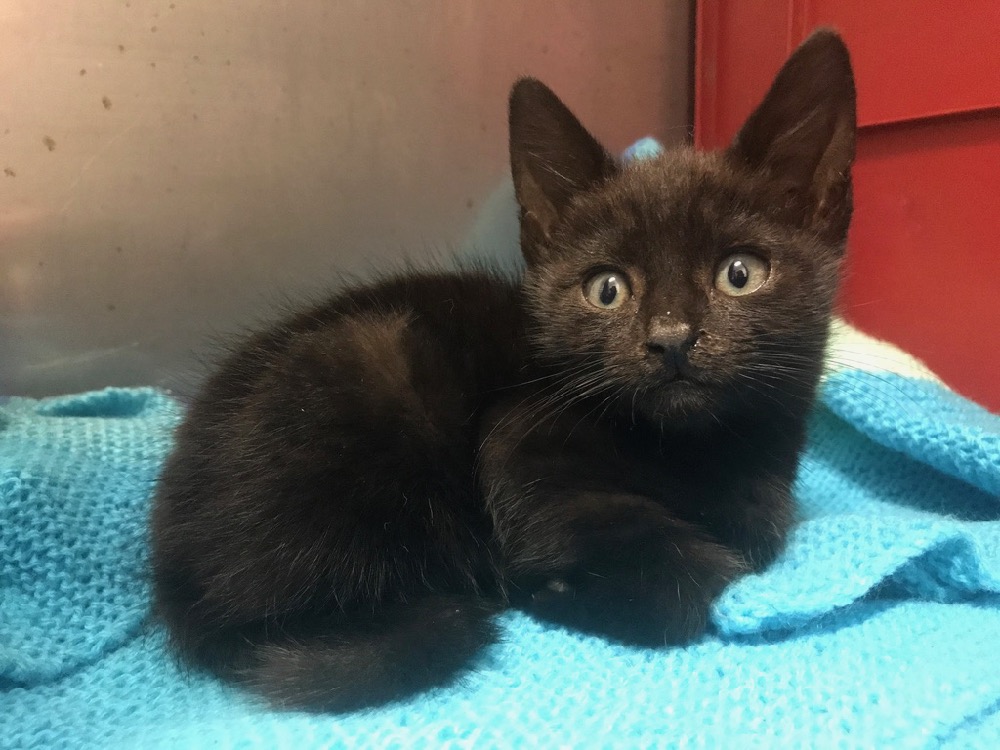 Returning to his car after a flight from Sydney, Mark alerted RSPCA South Australia and airport security when he heard meows coming from the car parked beside his on the second floor of the airport’s short-term car park.

“At first I thought there was a cat inside the car, but when I looked underneath I could see this black tail and tiny bottom.

“He was underneath probably the lowest car in the carpark, a Toyota sports car, so I couldn’t quite reach him to pull him out.” Employing a bit of animal psychology, Mark played within earshot of the kitten a short video he had filmed with his mobile phone of the kitten while it was meowing.

“When he heard himself meowing he must have thought it was another cat because he came out a bit, and I could see he wasn’t burnt by the exhaust or didn’t seem injured in any way, which was a big relief.”

Scooting from car to car with his would-be rescuers in hot pursuit and occasionally holding up traffic to make sure he wasn’t hit, the kitten finally stopped long enough under one car for a net to be thrown over it. Eventually, Bob managed to stretch far enough under the vehicle to pull the frighted feline out.

Dirty and with a possibly old break to his tail, kitten escapes otherwise unhurt

According to RSPCA South Australia Rescue Officer Nalika, the kitten is in good health despite his ordeal.

“He has a crooked tail, so that must have been broken a while ago, and he was a bit dirty from engine grease, but he’s a resilient chap and is doing really well in our care,” Rescue Officer Nalika said.

She seems to be making a habit of rescuing animals at Adelaide Airport, having saved a rabbit abandoned inside a box in the main terminal in June this year. Boeing, as the bunny was adorably dubbed, went on to be adopted into a loving new home. The happiest of endings – rescuer pledges to adopt little Bob

For Mark, who spent more than two hours helping with the rescue before finally heading home, the story has a particularly sweet ending.

Darren, the airport’s Customer Care Team Leader, will likely adopt the kitten – named Bob after one of his AFP rescuers – once he comes out of veterinary care and is old enough to be rehomed.

“I’m just relieved this little fella is OK and has a good home to go to,” Mark said.