Waking up to find your beloved apricot tree pillaged during the night can leave a sour taste in your mouth. . . but before you go ahead and buy some fruit tree netting, here’s something you might want to take into consideration.

Flying foxes (commonly known as fruit bats) are effective pollinators. During spring, you may notice increased bat activity in your backyard as they flock to blossoming trees, where they will typically hang around for about six weeks before moving on.

Following pollination, small green fruits begin to form on the trees, and this is when many gardeners and farmers begin to cover their trees with netting.

Netting may seem like the perfect form of defence against aerial raids on your fruit by birds and bats. Unfortunately, the use of some kinds of netting can prove fatal for our native wildlife. Netting can be fatal to native flying foxes

Mesh with large holes (greater than 5mm diameter) is more likely to entangle these native animals, causing injuries such as broken bones, lacerations to the wings and mouth injuries from trying to escape.

If injuries are severe, flying foxes can die from strangulation, blood loss, shock or dehydration. Entangled animals are also at risk of being attacked by dogs, cats and other predators. 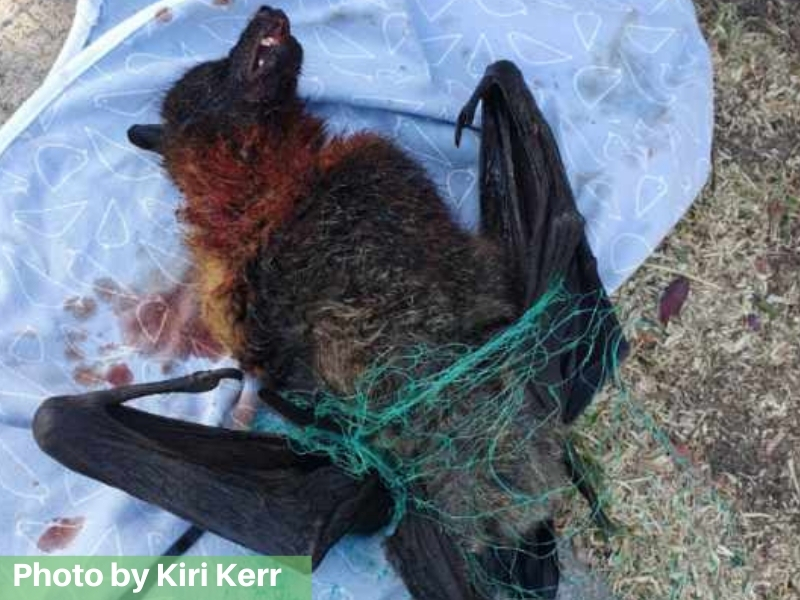 Watch out for baby bat season

During spring and early summer, flying foxes will carry their babies while they forage for food around metropolitan Adelaide.

Young bats will stay with their mothers until they become too big to carry, at which point they are left back within the main bat colony in Botanic Park, just east of the city, while their mothers go in search of food.

During this period – referred to as baby bat season – it’s important to frequently check your fruit netting to ensure that these mothers and babies haven’t been entangled in your fruit tree netting. There are wildlife-friendly alternatives on the market

Newer types of fruit tree netting are densely woven and have a small mesh size (less than 1cm square). It is usually white, so more easily seen by animals at night.

If you are using this type of wildlife-friendly netting, you should drape it over the entire tree and secure it at the bottom to prevent wildlife getting in underneath. More information on how to use netting without endangering wildlife can be found here.

On 1 September 2021, Agriculture Victoria introduced new regulations around the use of netting in an effort to protect wildlife. Nets must have a mesh size no greater than 5mm by 5mm at full stretch.

The strand diameter must be thicker than 500 microns or include a cross-weave design. The new rules apply to all Victorians with fruit trees grown on residential properties in suburban, urban and rural areas.