A Mount Gambier man who admitted to securing a cable tie around his dog’s muzzle was today sentenced in the Mount Gambier Magistrate’s Court. He was given a good behaviour bond in the sum of $200 for a period of 15 months.

The defendant was also ordered to pay $1600 in veterinary and legal costs, and was banned from owning any animals for 2 years. 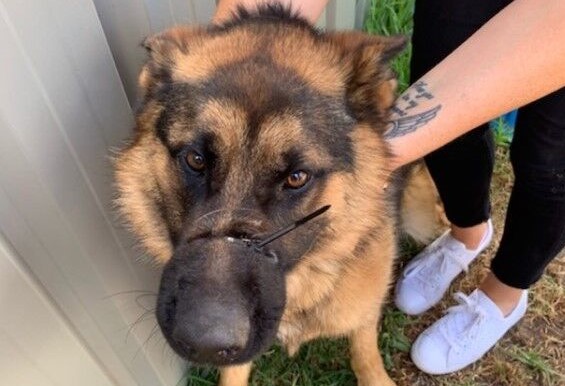 The 48-year old man faced charges under South Australia’s Animal Welfare Act of ill-treating an animal in relation to his 11-month-old female German Shepherd, named Chloe. The defendant bought the dog in 2018 from breeders in New South Wales.

Magistrate Fahey heard that on 9 March this year, members of the public alerted both RSPCA South Australia and Mount Gambier police to a dog that was lying down, tethered in the backyard of a home, with a cable tie around her muzzle.

Upon realising that the animal appeared not able to breathe naturally and to be in distress, a member of the public rescued the dog and removed the cable tie. The dog was provided with water, which she drank constantly for a long period. The dog also climbed into a plastic clam shell full of water and lay down.

Chloe was taken to a Mount Gambier veterinary clinic where she was examined, however no physical injuries attributable to the cable tie were identified. Mild hip dysplasia was also diagnosed, a condition that is not uncommon in German Shepherds.

“Panting is the main way in which dogs cool their bodies, because unlike us they do not have an effective system of sweat glands,” Dr Ward said.

“If you prevent a dog from cooling its body in this way, you put it at extreme risk of overheating, particularly in warm weather.

“Dogs must be able to cool themselves through their mouths, not to mention be able to drink and eat with ease.”

The defendant’s lawyer told the court his client had secured the cable tie around Chloe’s muzzle that morning, intending to remove it before he left for work that day. The court was told he later became distracted, resulting in the cable tie remaining in place until she was rescued at approximately 1:30pm. The temperature in Mount Gambier at the time the dog was rescued was between 23C and 25C.

Chloe has now been rehomed.

RSPCA South Australia Chief Inspector Andrea Lewis said the case highlights the need for people to learn about dogs and their care needs before acquiring one.

“This young dog was just doing what young dogs do – they want to chew things, to play and to have company,” Ms Lewis said.

“Tying your dog’s muzzle shut as a solution to stop unwanted behaviour is a shocking indication of how little this person understands dogs and their needs, and begs the question of why he bought such a large, active young dog in the first place.

“You cannot just stick a dog in the backyard, throw it some food every day and think that dog is going to have a happy life or behave in ways you want it to behave.

“We urge people to look into the time and rewards-based training dogs need when deciding whether owning one is a good idea, given their lifestyle.”