For Gemma Weedall, New Year’s Day 2021 will mark the turning of a new page (quite literally).

Pinned to her wall will be the first-ever edition of Distillery Dogs, a calendar designed to lift the spirits of South Australians who may be suffering from a bad case of 2020.

Determined to end the year on a good note, Gemma decided it was time to develop her own tonic by combining two of her biggest passions in life, dogs and gin.

“I’ve been thinking about how I can combine these seemingly unrelated passions and try to make the best out of what is a tough time for so many people. It’s been a train-wreck of a year,” she says.

Inspired by the popular Wine Dog calendars, Gemma is hopeful that her work will stir support for the local gin industry.

“I think we make the best gins in the world here in South Australia, they’ve won so many international awards, there are so many new distilleries popping up and that keeps growing every day.

“I love how people from all walks of life are getting into it. There are a couple of nurses, there are groups of friends opening new places everywhere. You see distilleries even popping up in people’s garages. It’s a grass roots culture, which is really connected to the land.” A calendar only about gin was all bite and no bark, so Gemma went looking for distillers’ dogs

“Every dog that features is connected to a distillery. They are either the distiller’s own dog or belong to one of the workers. We had a diverse mix of canines, big and small, old and young,” says Gemma.

Of course, working with a dozen pin-up pooches proved to be a little more challenging than she first expected. While looking over all the beautifully collated pictures, Gemma can’t help but be amused.

“It was all very chaotic, but of course you can’t see that in the beautiful end-result photos, they appear like they had been sitting nicely the whole time.” Gemma recalls one of her favourite photoshoots being the one with the November models, Lulu and Didge. These two Chocolate Labrador puppies collectively decided they had better things to do with their time than pose for photos.

“They were very energetic and excitable. I had to fend off an endless onslaught of playful puppy bites, while trying to get them to stay perfectly still.”

Gemma was thankful to have a few extra hands on site to help tame the fur babies of Barossa Distilling Co.

“They had an unusual curiosity in a broom that was lying near the set. So we ended up getting a distillery hand to prop that up behind the camera to keep their attention.”

The end result speaks for itself. The pictures uniquely capture the personality of each dog involved

Gemma’s favourite part of the project was getting to hear the backstory of the distillers’ favourite pooches.

She loved the fact that when customers arrived at each of the distilleries, they were often greeted by a wagging tail.

“Seppeltfield’s Chase was a rescue dog. I love how he’s grown up at the distillery. Chase likes to greet the guests as they arrive. He also likes to tell the workers when it’s time to go home. Chase doesn’t want any of them working too much over-time. He’s a true distillery dog.” Norm Weedall was happy to collaborate on the father-daughter project, lending his years of experience as a professional photographer to help Gemma capture her vision in picture form.

“He’s an amazing photographer. I trust his skill in that area. He always gave me lots of advice like dads do and sometimes I took it and sometimes I didn’t. He was very supportive and did whatever he could to help me out.” 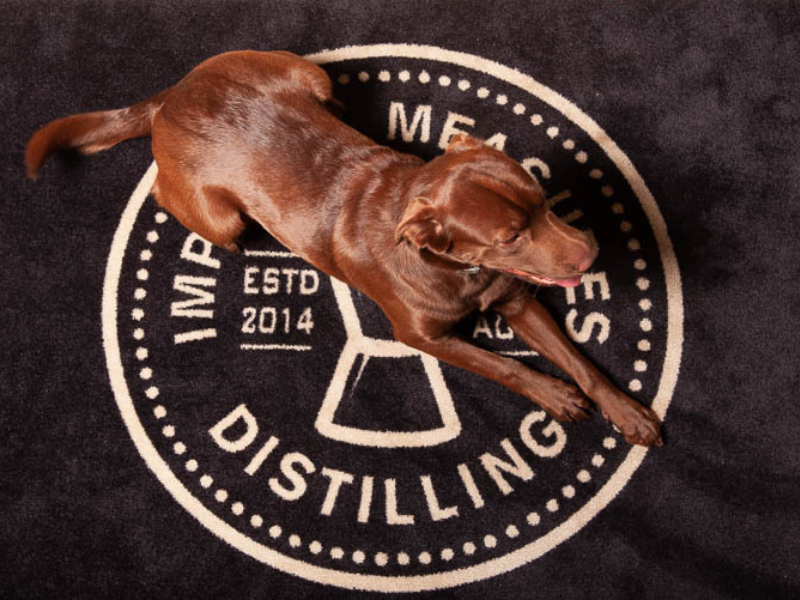 With a launch date in October, Gemma felt it was a great opportunity to coincide her event with RSPCA’S Cupcake Day

Gemma has generously offered to donate 50 percent of her calendar sale proceeds to the RSPCA.

The Distillery Dogs calendar is set to launch on the 4th of October at Ounce Bar in Thebarton.

“We will have a stall with some gin and tonic cupcakes to raise money for the RSPCA,” she said. Looking to start 2021 with a smile? You can grab your very own copy of Distillery Dogs here!