When RSPCA Inspector Ryan Anderson first saw Max, his fur was so thickly matted that it hid what was underneath – a dog who was nearly starving to death.

Inspector Ryan had attended a Northern property after a tip off from the police, who told him they had discovered a dog who appeared to be abandoned.

Hiding in the undergrowth of this property’s backyard was a little white terrier.

“When I saw him hiding among the bushes in that overgrown backyard, it was obvious he was really fearful of humans. He’d shutdown, he didn’t want to engage with me at all. All his body language was saying ‘leave me alone’,” Inspector Ryan recalls.

“When I finally got close enough to touch him, I could feel through his matted fur that he was so severely underweight and his fur was crawling with fleas.”

Max was in terrible condition.

RSPCA’s Head Veterinarian, Dr Brad Ward, estimated that Max hadn’t been fed properly for at last one month, and possibly up to three.

If not for Inspector Ryan, who knows how much longer Max would have been left in the overgrowth of that abandoned house’s backyard. Our charity relies on generous community support to keep inspectors on the road. Will you please help our inspectors be there for more neglected animals like Max?

To say that our veterinarians were shocked at Max’s condition would be an understatement.

The terrier weighed just 3.8kg, with a body condition score of 0.5 out of 9. Given that 9 is obese and 5 is ideal, Max was lucky to be alive with such a low score.

As if that weren’t bad enough – the poor boy was absolutely covered in itchy fleas. After shaving his horribly matted and neglected coat, our dedicated veterinary and animal care team put Max on a specialised diet while he had frequent medicated baths, ongoing tests and treatments.

He was kept under the watchful eye of our 24-hour Animal Emergency Hospital team for two weeks.

Our team was so moved by Max’s amazing bravery.

We’ll never know just how long he was confined to that backyard with no food or water, but it was clear he had been neglected for an extended period.

Yet, as he continued to receive the love and care he’d previously been deprived of, Max started to come out of his shell, and he slowly became less fearful and more trusting.

Thanks to our vets and animal care staff, Max finally received the treatment he needed, and was shown the love he deserved.

At RSPCA, our veterinarians and animal care team pour their heart and soul into helping animals just like Max. But, their work is 100% funded by community donations. Will you give a gift to ensure our vets and animal care staff can continue to be there for animals like Max? 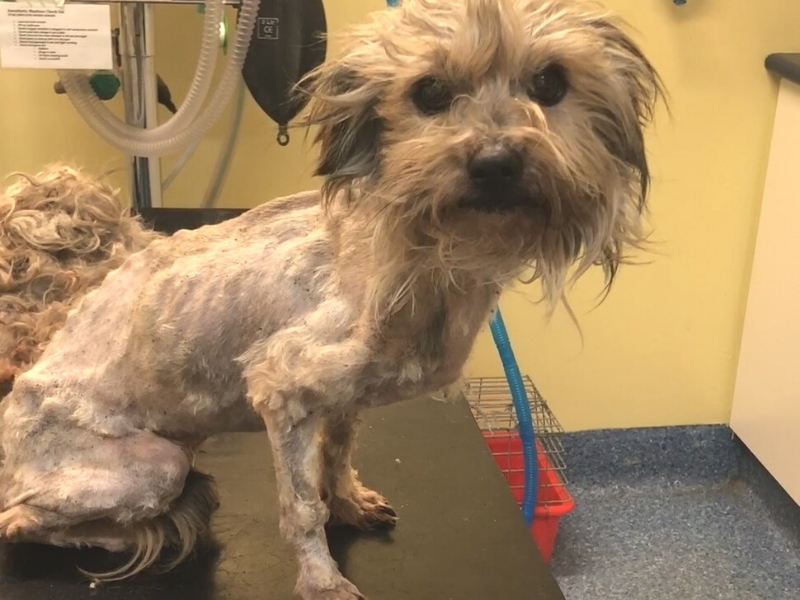 After all Max had been through, we’re so glad to say that there was the biggest light at the end of the tunnel.

A caring family was awaiting him.

After some time recovering in foster care, he was ready to find his forever home – and that’s when he met Yvonne.

“When I saw Max at the Lonsdale shelter I just knew he would be perfect for me and my family,” Yvonne shares.

Now, Max spends many of his days at the beach, running around and enjoying the fresh air with his loving fur mum and fellow rescue dog Jonti.

“When I take my dogs down to the beach, watching them run around and doing the things that dogs do – sniffing here and sniffing there, it gives me great satisfaction. Seeing him happy and having a good life makes me feel that I have done something worthwhile.”

Max also loves having cuddles on the couch! It’s some consolation to Max, and all he went through, that we prosecuted his former owner in court for breaching SA’s Animal Welfare Act.

Max’s previous owner was convicted of animal ill-treatment and given an 18-month good behaviour bond in the form of $500.

Behind the scenes, our legal team fights for justice in cases like Max’s. Cases where animal abuse is so bad that previous owners must be prosecuted. Will you support the work of our single legal counsel with a donation? We know Max’s story hasn’t been easy to read.

But after everything, we are so relieved he made such a great recovery and found such a wonderful home with Yvonne.

He’s come such a long way since Inspector Ryan first found him, hiding in that overgrown backyard, suffering in silence.

“It’s a huge relief that he recovered from that ordeal and has found such a great home. He’s a beautiful little dog and seeing him doing so well now is a joy,” Inspector Ryan shares. Sadly, Max is far from the only pet left to die alone. Last year, RSPCA South Australia inspectors rescued over 300 dogs and puppies who were abandoned in backyards and vacated properties.

As a charity 91% funded by community donations, we hope you will support us to continue to be there for animals like Max.

Max only has people like you to thank for his happy ending. To save more neglected animals and give them the best chance of life, please donate today.

One thought on “Matted, covered in fleas and left to starve in an abandoned backyard – Max’s incredible survival”