Rapid regrowth fuelled by high rainfall across Kangaroo Island is enabling RSPCA South Australia to wind-down its wildlife feeding program as more animals start to forage for themselves.

Launched four months ago, the program has been providing supplementary feed to native animals and birds in the wake of fires that raged across the island from late-December to mid-January, destroying massive swathes of habitat.

Field Operations Manager Melanie Lambert, who is overseeing the program, is in no doubt the work of volunteer teams and local landholders, distributing feed throughout fire-affected regions, has saved many animals that were at risk of starvation.

“It was shocking enough to see so many animals incinerated or suffering horrendous burns, but to then leave those animals that survived to fend for themselves in that bleak landscape was totally unacceptable to RSPCA,” Ms Lambert said.

“Judging by the huge response from our community in wanting to volunteer for this program and donating to it, that awful scenario was unacceptable to most South Australians too.”

During the program’s peak, RSPCA South Australia volunteers were replenishing feed at 89 stations, eight of them located on the outskirts of Flinders Chase National Park. The 326 square kilometre wilderness region is where lightning strikes in late-December ignited the first fires on the island. The park remains closed to the public.

Outside the park, an ever-increasing number of regions are experiencing sufficient regrowth to enable volunteers to deactivate feeding stations. The teams continue to replenish feed at 42 of the original 89 stations.

“This program was only ever intended to be short-term,” Ms Lambert said.

“We’re providing feed just long enough to help the wildlife get back on its feet, but it’s important that we withdraw before the animals develop dependency.

“So every time we’ve deactivated a feeding station it’s been cause for celebration because it’s meant the animals in that area are able to feed naturally from their environment.”

Images taken in recent weeks by motion-activated cameras show possums, echidnas, goannas, wallabies, bandicoots, kangaroos and various bird species congregating at the feeding stations. So far, native animals have devoured more than 66 tonnes of vegetables (including 9.7 tonnes of carrots and 11.7 tonnes of sweet potatoes) and pellets.

While volunteers have distributed most of the feed at feeding stations, RSPCA South Australia has also provided 45 landholders with more than 11.5 tonnes of pellets for distribution on their properties. A further 2.3 tonnes of pellets have gone to Kangaroo Island Wildlife Park, which reopened to the public on May 16.

“This wildlife recovery work is being driven by locals, both volunteering with the program and collecting feed from us to distribute on their land,” Ms Lambert said.

“Although we’re slowly winding down, local groups and individuals will continue the great work they’ve been doing – some of them for decades – rescuing and caring for the island’s wildlife.

“From an animal welfare perspective, the sooner there is sufficient regrowth so that all of the island’s wildlife is able to forage naturally for food, the better.

“Happily, with all this rain we’re getting, that time is looking much closer now.” 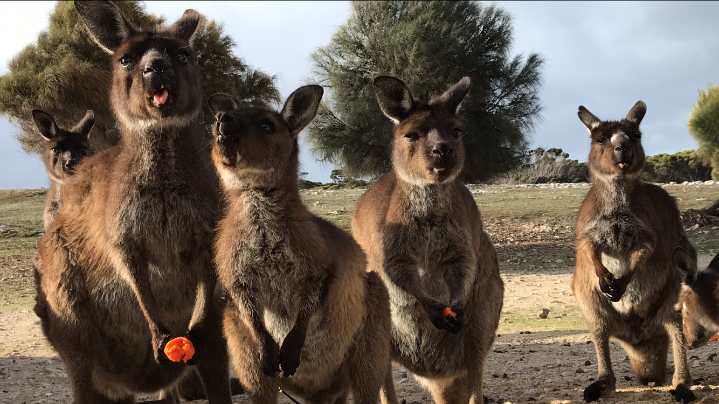 This emergency response is being funded by donations made to RSPCA South Australia’s Bushfire Appeal.