Harry the greyhound was surrendered to our Lonsdale shelter in September 2019. Just one month later, he was adopted by a family who love nothing more than showering him with affection.

At six years old, Harry was brought to us by his previous owner whose busy schedule did not permit enough time to care for a pet.

Although the previous owner loved Harry, this handsome boy wasn’t getting enough nourishment and had become underweight. Rather than letting him suffer, the owner thought it best to surrender Harry in the hope that he would find a new family who could give him the care and attention he needed.

After one year in his new home, Harry is back to his regular weight and happier than ever! Harry is a great example of an animal who has been given a second chance at a happy life.

All animals deserve to live happily and to be treated with respect. Saying goodbye to your pet is such a tough decision to make, which is why here at the RSPCA, we empathise with all who surrender their animals to us.

If you are struggling to care for your animal and you are thinking about surrendering your animal to a reputable animal welfare organisation like the RSPCA, we encourage you to explore other options first. You can find information about your options HERE.

Once all options have been explored, and you have decided that surrendering is the best in your particular circumstances, contact the RSPCA and we can talk you through the next steps. We know that saying goodbye to your pet is an emotional experience, and we thank you for coming to us for help. After only one month at our Lonsdale shelter, Harry the greyhound captured the hearts of the O’Shea family. They were looking for a furry friend to join their family, but they had never considered adopting a greyhound until meeting Harry.

The O’Shea family met Harry at our Lonsdale shelter and his big brown eyes immediately drew them in, although meeting new people made him quite shy and nervous. It was Harry’s gentle and affectionate personality that won them over.

“We wandered around the shelter to see some of the other dogs, however no other dog looked like they needed us more than Harry,” says Mark O’Shea.

Harry has been with his new family for a year now, and is having the time of his life!

According to the O’Sheas, Harry’s personality really opened up once he gained confidence in his new surroundings and with his new family, and now he loves nothing more than relaxing on the couch and playing with his toys.

The O’Shea family is giving Harry the care and kindness he deserves, and they love to spoil him by taking him on long walks, trips to the beach, and with plenty of cuddles.

Harry has also now returned to a healthy weight. He came to our shelter weighing 28kg, and he is now a strong 38kg, with a seemingly unlimited supply of energy.

The O’Shea family is completely besotted by him.

“Our home would not be the same if he was not with us,” Mark shares. “We were unsure about adopting a greyhound at first but we can definitely recommend this breed of dog to anyone who might be considering this type of dog.” 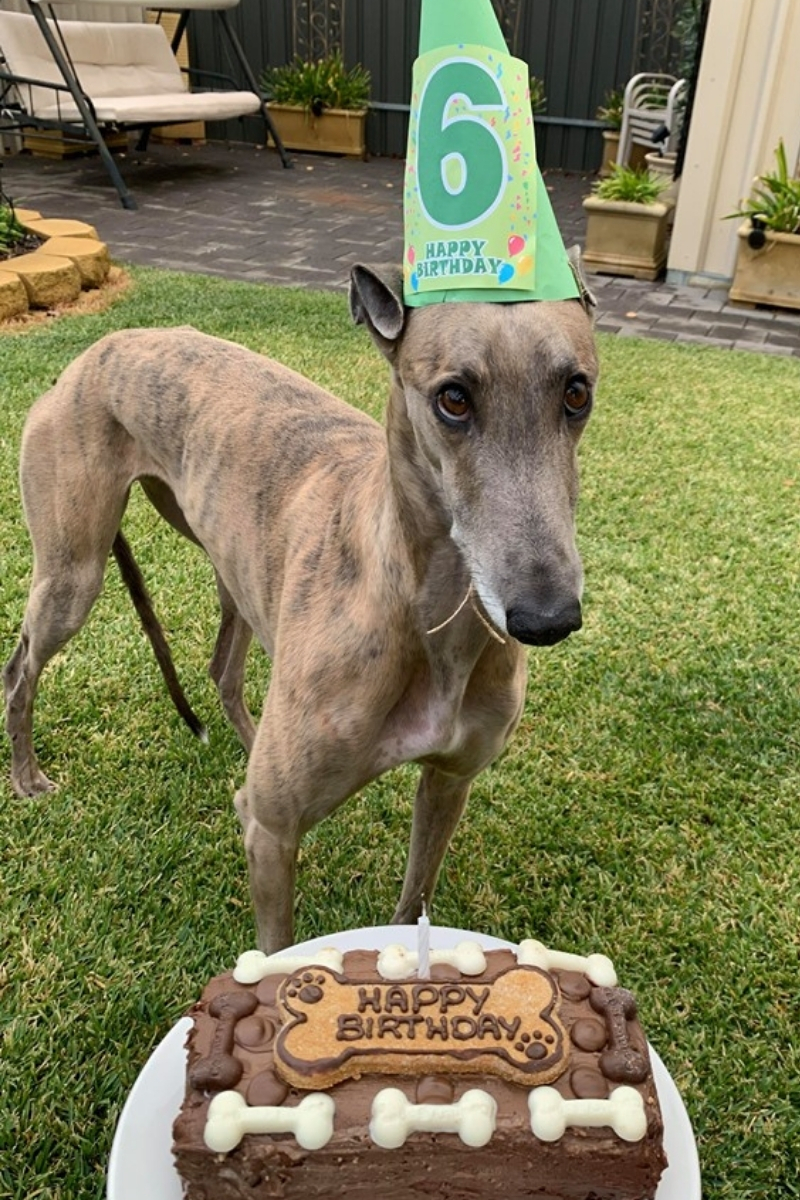 Give the animals in our shelters the best lives possible

If you have a soft spot in your heart for stories such as Harry’s, we urge you to consider supporting one of the animals in our care through our Guardian Angel Christmas appeal.

This appeal is perfect for someone who wants to support an animal in need but isn’t able to adopt one. It allows someone to share an animal’s journey, from entering one of our shelters all the way through to being adopted. The chance to become a Guardian Angel for an animal in need this Christmas makes an ideal gift for fellow animal lovers among your family and friends.

With your donation, you can help one of the more than 8000 animals that the RSPCA cares for every year in South Australia. Each of these animals deserve to have the chance of a life like Harry’s, and every donation – big or small – will bring hope to the animals waiting in our shelters this Christmas for their forever homes.

Find out more about our Guardian Angel appeal here. If you’re considering opening your heart and home to a rescued animal like Harry, head over here to see all our animals currently available for adoption. We are so grateful for families such as the O’Sheas for opening their hearts and giving Harry a second chance at a happy life.