Everest, a 5-year-old Chihuahua X, was found wandering homeless in the Riverland. Every day, he was fighting for his survival.

Terrified of people, it took some time for him to be caught and given the medical care he desperately needed. It was clear that he had endured a lifetime of neglect and was suffering from psychological trauma.

Everest’s journey hasn’t been an easy one. It has required a team effort, he is still a bit timid, but he is making progress every single day. 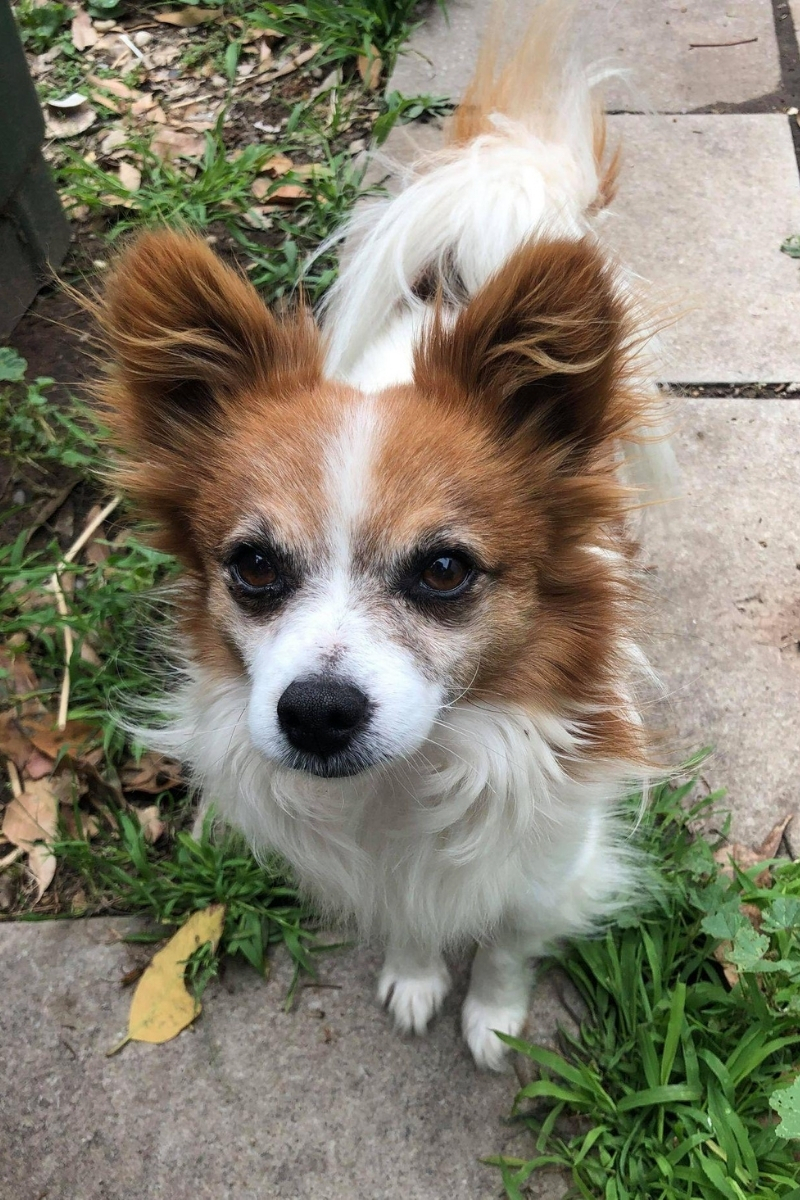 Everest’s early life is a mystery…

Everest first came to our attention in July 2020, after someone living on the outskirts of Renmark reported a stray dog wandering around nearby paddocks. No-one knew how he got there or who had owned him previously. Unfortunately, it now seems likely someone abandoned him.

The Renmark local who spotted him tried to catch him, but he would often hide under her house where he couldn’t be reached. For some reason, he was extremely scared of people.

What was really worrying was the large mass hanging below Everest’s belly. It was obvious this dog needed to see a vet as soon as possible, so one of our inspectors went out to help catch him.

It was impossible to get close to Everest, so a trap was set one night. By the next morning, Everest had been caught and Inspector Verity immediately brought him to our veterinary team at the Lonsdale shelter. The beginning of an eventful journey

Due to Everest’s fearful nature, he refused to be handled at all. It was clear he was suffering from extreme anxiety. Sadly, this is the case for many abandoned animals who are left to fend for themselves.

When Everest first arrived at the Lonsdale shelter, our vets could see the extent of his poor health. He was vomiting, had diarrhea, and was covered in fleas. Not to mention this large mass hanging under his little body, which the vets were very concerned about.

After staying at the shelter for about a week, Everest’s care team decided it would be best for him to be placed into a foster home to gain confidence and hopefully ease his anxiety.

Things were off to a rocky start when Everest went to his first foster home. For the first few days, he made sure that he kept a safe distance away from people. Seeing how easily stressed Everest was, his foster carers knew they needed to take things slowly.

The only time Everest would come remotely close to anyone would be if they stayed completely still. Even the slightest movement spooked him.

His foster parents were worried that this slightly wild little dog would try to escape, so they took precautions by wedging wood underneath their backyard fence.

At night, Everest would bark until his foster parents woke up and let him outside to go to the toilet. He refused to go outside alone.

Despite their interrupted sleep, Everest’s foster parents were extremely patient with him. They never put him in situations that escalated his anxiety and always made sure he was comfortable.

After a couple of weeks in his first foster home, Everest had made progress. He was able to go outside by himself and even accepted a scratch behind his ears and on his tummy! These were small steps, but for Everest and his foster parents, they felt huge. Things eventually started to turn around for Everest

Everest then moved into a second foster home, this time with Anna and her husband Aaron.

Although this was another change for Everest to cope with, he soon began showing more signs of improvement. He no longer trembled or hid from people, and he even stopped barking in the middle of the night!

As he became more confident in his surroundings, he again started to go outside by himself and happily explore the garden. This confident behaviour would have been unheard of even a month before.

While he liked some human company, Everest still kept some distance away from his new foster parents. On rare occasions, they saw a more playful side to him, which they were very happy about!

To encourage Everest to play and become more confident, they set up different enrichment activities to keep him entertained. Everest enjoyed the Snufflemat that had treats hidden inside, as well as foraging for treats scattered along the ground.

Gradually, he let Anna give him a few pats and as his confidence with Anna grew, he began to follow her around the house and garden. A healthy dog is a happy dog!

Two weeks after living with Anna and Aaron, Everest underwent surgery to remove the mass on his lower abdomen.

The mass was 15cm in diameter, which is extremely large on any dog, let alone a little dog like Everest. Thankfully, our vets were able to remove it completely, and it turned out to be benign. Everest will have regular check-ups to make sure no more masses appear.

While he was being treated for his tumour, Everest was also desexed and had grass seeds removed from one of his ears. Luckily, they hadn’t burrowed deep enough to cause damage to his hearing.

Now, with all these procedures behind him, Everest is really starting to come out of his shell!

A happy ever after for Everest

Shortly after Everest had surgery, Anna and Aaron decided to adopt him. We love a good ‘foster fail’, and if there was ever a dog that deserved to find their forever home, it was Everest.

Anna is still working on building up his confidence, and he is improving every single day. He now wakes up bright and happy, and is a lot more energetic and playful. He seeks out cuddles from Anna, and enjoys head bops and smooches from the couple’s cats! He’s become a very loved part of their family, and Anna says she can’t imagine life without him by her side

Although he is still quite scared of most people, including Aaron, Everest will gladly accept any treats thrown his way. The little battler is also still reluctant to be picked up or to have his wounds assessed. As with everything in this long road to recovery, it’s slow and steady, one day at a time. He’s now working towards being able to enjoy walks on a lead and learning the basic training that he missed out on as a puppy.  Earning treats and praise through positive reinforcement has been a fun way to learn new things!

Everest’s story is a reminder that all animals, no matter their physical and mental condition, deserve the chance to recover and experience life in a loving home. So many people have come together to help this little dog get his life back on track.

As a charity that is totally reliant on community donations to rescue and care for animals, we hope you will support us to continue to be there for animals like Everest.

To save more neglected animals and give them the best chance of life, please donate today.