Allistair was trapped, his meows for help echoed out of the dirty industrial bin. No-one knows how he ended up inside this huge metal box, but the lid was down and the suspicion is that someone dumped him. This poor cat could easily have died all alone in the dark and filth.

Thankfully, his cries for help had not gone unnoticed. A worker at the Outer Harbour industrial site lifted the heavy iron lid to find a scared and skinny cat looking back at her. 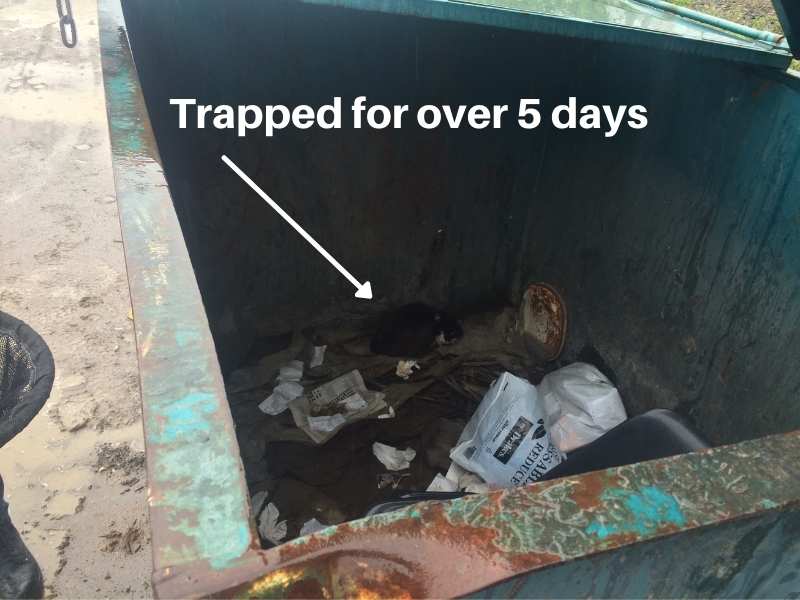 Help was on the way

Rescue Officer Soraya was quick to respond, arriving to find a very hungry and scared cat.

“This poor boy was all alone in the dark. I had to lower a net to catch him, but he was very cooperative,” explained Soraya.

“He looked sorry for himself – he had an unkempt coat, a sore eye and was quite skinny. He seemed to have just given up hope at that point.

“It’s hard to say how long he had been trapped inside there for, but going off when the bin was last emptied, it was at least five days.” He was one thirsty cat

Allister was inspected on arrival at Lonsdale by our Cat Care Team Leader, Jacky, who couldn’t believe how thirsty he still was, despite Soraya giving him water as soon as she had rescued him from the bin.

“He was severely dehydrated, had mild flu symptoms  and was not at all well,” Jacky recalled.

“I helped one of our vets to check him. I gloved up and got him out of the cage and we gave him more water.

“He was then placed in an Isolation Room where I looked after him for the next few days as we weren’t sure about his behaviour.

“He was a little feisty the next day but we were able to handle him enough to apply eye medication. A week later he was moved to our Cat Behaviour Room and he spent about a month there, getting plenty of gentle attention from me to help him become more relaxed with people.” Jacky decided Allistair needed some respite. He still had some major trust issues and resisted being picked up.

“I decided to foster Allistair to see if he would cope better in a home environment. For the first month, he just hid under the bed and would not come out for me, no matter what treats were offered,” said Jacky.

“It became a waiting game and I just kept spending time with him and trying to gain his trust. He had been through so much and just needed some extra love and patience. The path to recovery is slow for animals who have experienced traumatic events. Jacky had the painstaking task of rebuilding Allistair’s trust and confidence.

Fortunately, all her hard work started to pay off.

“It was about five weeks later that he finally came around. I was sitting on the couch one day and he jumped up on the couch with me and allowed me to give him some pats.

“Allistair slowly gained more confidence and began jumping up on the couch for cuddles, pats and head rubs,” she said. Allister coming out of his shell hasn’t all been peaches and cream. For Jacky’s other cats, he’s been quite the nuisance.

“Mine are all older cats who like to enjoy a relaxed lifestyle and are not interested in playing games.

“They find him too boisterous and playful.

“He loves to play with toys and is always looking out the window to see what’s happening. He is an affectionate boy when he gets on your lap and once he has had enough pats he will go find himself a place to relax and have a nap or go off to play by himself.” Allistair is now looking forward to the next chapter of his life – finding himself a loving forever home where he can play and get as many pats as his heart desires.

Looking for an adult cat to snuggle up to on a cold rainy day?

Check out our list of gorgeous furry forever friends available now for adoption.