Picture this: it’s a balmy Monday morning. You’re taking a leisurely stroll with your bestie, and you tell them you have a surprise. With their love of surprises almost as great as their love for walks, naturally, your friend can’t wait.

You take them into a crowded room, full of other people sitting patiently with friends of their own, all waiting.

Admittedly, you feel a little bad, but this is the only option you have. You needed to take action before things got out of hand, and this will be better for everyone.

A figure in a white coat calmly walks towards you and announces that it’s nearly time.

She’s going to cut your bestie’s balls off. It’s time to have ‘the talk’

We know what you’re thinking.

What kind of person would do that to their friend? Is that even legal?

We hear you, and yes, it is legal. In some cases, it’s even required as a matter of law.

For companion animals, that is.

(To be clear, you’re definitely not allowed castrate your human best friend, and if it’s ever crossed  your mind please seek help immediately.)

So let’s talk about desexing: what is it, when does it need to be done, and is it really necessary to go snip snip on your beloved pet?

Desexing, snip snipping, neutering – whatever you want to call it – is the process of a qualified veterinarian removing an animal’s reproductive organs in order to prevent breeding.

For males: vets make a small nick on or near the scrotum, gently squeeze the testicles, and remove them. This process is commonly called castration.

For females: vets make a fine incision line along the animal’s abdomen, and remove their uterus and ovaries. This process is commonly called spaying.

While it’s most commonly done for cats and dogs, we recommend desexing rabbits, too.

It may seem daunting to send your beloved animal companion in for general anaesthesia and surgery. But please rest assured that the procedure will be relatively quick and minimally invasive, and your pet will be felin’ fine in no time. In South Australia, all dogs and cats born on or after July 1 2018 must be desexed by six months of age.

Handily, all dogs and cats adopted from RSPCA are already desexed, whether they were born after this date or not.

But – if your pet came into your care fully equipped with baby-making equipment, you must make sure they’re desexed by the time they reach six months.

Failing to do so not only means you’ll have to pay a fine, but also puts you at risk of accidentally littering SA (with lots of extra puppies or kittens, who you may not have the resources to care for). 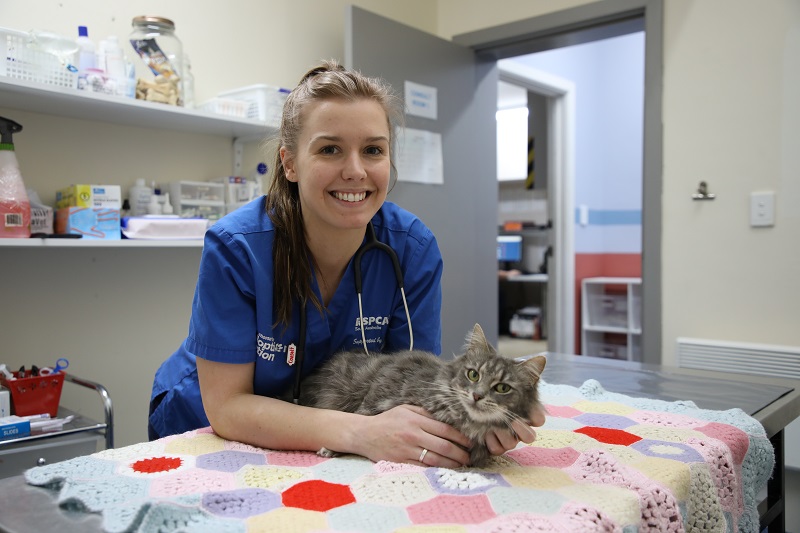 The truth is – unless you know where your pet is all the time, by leaving them un-desexed, you run the risk of an unplanned pregnancy.

If your pet is male, they could be playing around without you even realising, and that’s simply not fair to all the babies they have a hand in producing – many of whom will end up homeless.

With female pets, you’ll see firsthand the consequences of leaving them un-desexed, and you’ll need to make sure you find homes for every one of their tiny babies.

Every year, RSPCA shelters across Australia take in over 124,000 animals, with many of these the result of unplanned breeding. In particular, overbreeding is a huge problem with cats since felines are more likely to roam.

The simple way to reduce this number? Desexing. Why would I want to sterilise my four-legged friend?

If you’re not so bothered about your pet littering, desexing has numerous benefits in addition to preventing unwanted pregnancies.

Desexed males will have a significantly reduced risk of prostate isssues and can no longer get testicular cancer, while desexed females will no longer get their periods or be at risk of uterine or ovarian issues.  That’s right – if your female cat or dog is not desexed, they’ll start menstruating. Not quite the way humans do, but they will be uncomfortable and you may see some blood. Why put them through that?

In addition, the behavioural benefits of desexing are very much helpful, with neutered pets less aggressive, less likely to roam and less likely to mark their territory (you know, with urine).

At RSPCA, we strongly encourage confining cats to your property to not only avoid nuisance issues with neighbours, but to protect your cat from things like fighting or being hit by a car. The fact that roaming is a natural instinct of cats can make confinement more difficult, but wouldn’t it be great if there were a simple way to reduce this urge? Spoiler: there is, and it’s desexing. When does my pet need to be desexed?

While South Australian law requires dogs and cats to be desexed by the age of six months, at RSPCA we advocate desexing pets a little earlier.

Across Australia, RSPCA shelters engage in what’s known as early-age desexing (EAD), where we desex kittens and puppies from eight weeks of age. The reason for this?

Desexing surgery is simpler and recovery is faster when animals are younger, as their anatomical structures are less developed.

Not only is the surgery incision site smaller, but bleeding is reduced, and there’s less tissue trauma and tissue handling involved. It also takes less time to prepare animals for EAD surgery, which means less time under general anaesthesia. And, the anaesthetic recovery and wound healing times are also shorter, providing further animal welfare benefits.

Not to mention, cats can actually start breeding as young as four months of age, which puts us at risk of unplanned litters earlier than we might expect.

Plus – the earlier an animal is desexed, the earlier they (and their owners) can experience all the behavioural and health benefits of desexing. Why wait? How can I get discounted desexing?

Sold on the snip snip, but something’s holding you back? Is that something $$$?

Good news – discount desexing may be available to you through the NDN (National Desexing Network)!

The NDN is a national referral system giving pet owners in financial need access to low-cost desexing. Across SA, there are 21 vets participating in the NDN’s discount desexing scheme (and one council – go Whyalla). These vets offer varying discounts on desexing for pet owners with a desexing voucher from the NDN.

If you hold a concession, pension or veteran government card, you’re eligible for a desexing voucher.

You can search for nearby participating vets and apply for a desexing voucher at the NDN’s online directory here. While we encourage both cat and dog owners to desex their pets, this piece was written as part of our Cat Management campaign, in which we’ve joined with AWL to release a comprehensive plan for cat management in SA. Read about the campaign and download the plan here.

3 thoughts on “Is your pet a player?”